Developing Higher Technical Institutes as Platforms for Growth and Innovation

ITS are not just non-academic tertiary training courses: they are institutions that can play the role of platforms for the development and innovation of entire territories, thanks to the integration that they achieve. This is done at multiple levels, between learning processes and production processes, according to a logic of constant hybridization of research, training and work.

In this sense, ITS can be directed to further develop collaboration with the companies system and other training partners in at least two directions: the implementation of co-designed research and training services, and the intertwining of training supply chains and productive ones.

As for the first, IT is implementing research and development activities for local companies, involving their employees and especially the students and graduates themselves. This type of activity would also allow less structured and smaller companies to enter a network through which to access business development processes, starting with collaborations on specific projects or hosting young interns, and then hiring them through a research apprenticeship, assigning a project to the student for the development of the company.

A tool that is still not very widespread among the ITS, but which could multiply the effectiveness and benefits of ITS related to Industry 4.0, is the “Higher education and research Apprenticeship” (or Third level Apprenticeship).

Through it, companies could already hire students by participating even more actively both in the conception of the path and in their company training, in direct contact with the technologies implemented: moreover, all the transversal skills that make up the training offer of these courses would be strengthened.

Not only that: using the apprenticeship also after obtaining the diploma, for carrying out research activities, it could extend the relationship between companies and ITS and encourage the development of further collaborations, more focused on research, development, technology transfer.

A contract like this is particularly promoted by European institutions, which have recently renewed their commitment to the promotion of high quality apprenticeships thanks to the renewed European Alliance for Apprenticeship, created by the European Commission, and should be incentivized in such a way as to favor their spread, even among smaller companies.

It would be advisable to restore the funds (EU and national) and the related tax incentives intended to cover the costs for the training of Third level Apprentices, as to concretely support companies in the  activation and management of these dual courses carried out in apprenticeship. 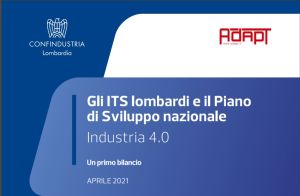 Among the 9 foundations involved in this interview, 4 underlined the value of Higher education and research Apprenticeships: 3 implemented it directly in their paths, with a total of 10 contracts activated, to facilitate the achievement of the ITS degree to students already hired at the company and to increase the training role of the latter; one, on the other hand, is developing Research Apprenticeships to encourage the recruitment of its graduates, while maintaining a training relationship with them (and with the companies involved) capable of triggering further innovation processes.

However, a tool that is still not very widespread, even at national level: 199 Higher training and research Apprenticeship contracts were activated for the achievement of the higher technical education diploma in Italy, according to recent ANPAL data, 59 of these in Lombardy.